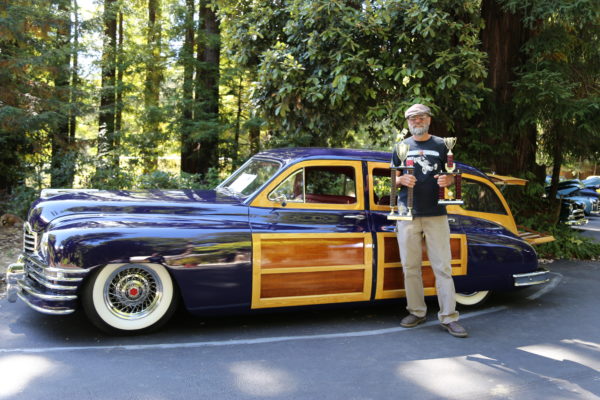 Best of Show and People’s Choice: Mike Williams of Sacramento for his 1948 Packard Station Sedan Woodie with a customized tailgate. 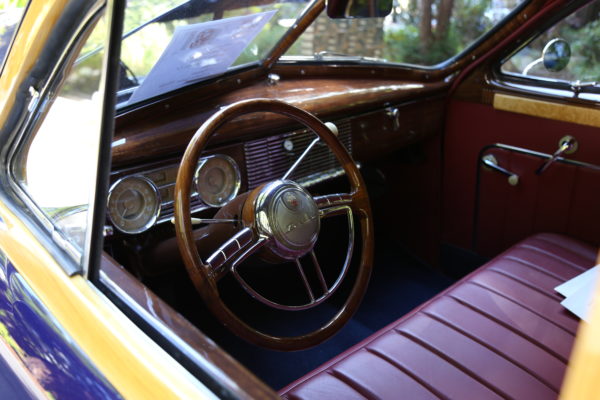 Admission to the show is free with a $5 parking donation. 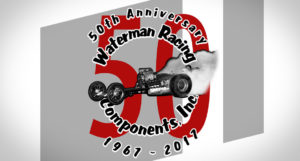 The 9th Annual Gualala Arts Show and Pinewood Derby is set to honor the 50th Anniversary of Waterman Racing Components and the men who built it! We expect it to be our best auto show yet!

Dragsters Fired Up 11am

Pick up & turned into raffle station

If you are a car enthusiast and love the nostalgia of old cars, the sound and fury of dragsters, the art of hot rods, customs, and modifieds, looking at original cars you lusted after in your youth, and/or rare and unusual contemporary automobiles, you’ll love the Gualala Arts Auto Show. Located on the beautifully landscaped grounds of the Gualala Arts Center, this is a car show you can actually stroll through, talk to the owners and appreciate each car, truck or motorcycle for the piece of art it is.

Located up the hill behind Gualala Supermarket, one would never know that Sid Waterman’s unassuming Waterman Racing Components shop has held an international reputation for excellence in the great world of auto racing for more than 30 years and continues to be an industry leader not only for drag racers, but also for Indy, NASCAR, and USAC customers.

Sid started Waterman Racing Engines in 1967. He moved with his wife, Judy, to Gualala in 1979, selling the engine building part of the business and opening a new enterprise specializing in fuel delivery systems. In December of last year, Waterman Racing Components partnered with Aeromotive, Inc., and this past April was the company’s 50th Anniversary.

Joining Sid Waterman for the auto show and 50th Anniversary Celebration at the Arts Center will be his longtime driver Ronnie Hampshire, recently inducted into the Drag Racing Hall of Fame, his brother, Jeep, who built the engines, and Kent Fuller, who constructed the chassis and is also in the Hall of Fame.

It will be a day of great fun, good food, shared automobilia, and the ear-shattering roar of the Waterman-Hampshire classic nitro rail that set a world speed record in 1965!

DJ Sister Yasmin will be spinning the tunes all day long on the JAMI Amphitheater. Between raffles and speakers, Sister Yasmin, the coast’s favorite professional deejay and music selector, will play oldies and goodies for dancing and entertainment.

This half-century of automotive excellence is a tribute to the hard work, perseverance, dedication, and skill of a young man who paid back his sponsor at a drag meet fifty years ago.  Exactly how this unassuming man built a business with facilities at the Indianapolis and Charlotte raceways from his offices headquartered on Church Street in Gualala is an inspirational story.

It began when Waterman was lured to a Fremont drag strip in 1959.  The first moment he heard a nitro-fueled rail fire up he was hooked.  It has been his passion ever since.  He moved from his boyhood home in San Jose to Southern California to be near the center of drag racing.  He began wiping wheels on dragsters and worked diligently to learn all he could about making cars go faster.

In 1967 his life changed again at the annual Bakersfield March Meet.  He was one of 140 entrants trying to qualify for 32 spots in the race field when a stranger asked why he was doing poorly.  Waterman said he needed better tires so the man gave him $400 to purchase new tires.  The car qualified third and when Waterman used his prize money to pay back the generous sponsor the man said he had done the same thing for nine other entrants, but Waterman was the only one who paid him back.

Two weeks later the same man called to ask if Waterman wanted to buy his machine shop and that day Waterman Racing Engines was launched. His boss at the time encouraged him and gave two pieces of advice — (1) never put out a product unless you know it is the best and (2) be sure the product looks better than it performs. Waterman has always followed that business plan.

Over the years Waterman parts have been in Top Fuel, Funny, IRL Indy, Sprint, and NASCAR champions’ cars year after year.  He has even designed Formula 1 parts for the Penske organization.  In 2009 Waterman was inducted into the International Drag Racing Hall of Fame.

Just last year he gave the introductory speech when Ronnie Hampshire received the same honor.   He has also received special recognition from the United States Auto Club and Car Craft Magazine for his engines and safety innovations, particularly for his fuel pumps.

Tired of the traffic in Los Angeles, Sid and Judy discovered Gualala nearly 40 years ago and fell in love with the area.  Waterman Racing Components has been a vital part of this community since Sid moved to Gualala to raise his family and fulfill his promise to his surfer wife that someday she would live by the sea. 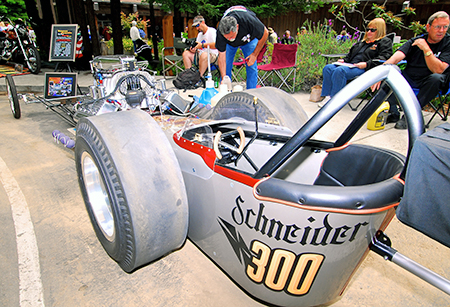 Cars must pass inspection to qualify for racing. Present your car for inspection from 10 am to 11 am, Saturday, July 15. Only 1 entry per person is accepted for each classification, and the racer MUST BE PRESENT for their car to be entered and run in the races.

Vintage and Unlimited class are open to racers of any age. For Vintage class, cars must have been previous Gualala Arts Pinewood Derby entries or built prior to January 2017.

Download your “Cruise our local Businesses” passport here.  Make a purchase at the 60 participating local businesses (listed on the back of passport) and receive a stamp or mark on your passport in the numbered square for that particular business. Turn your passport with as many marks as possible into Gualala Arts Center at noon on July 15 during the 9th Annual Gualala Arts Show.  The more marks on your passport, the better your chance to win the Grand Giveaway!

All passports will be entered into the raffle for the Grand Giveaway prize of a 2-night stay in House No. 4 at the Point Arena Lighthouse and dinner for two at the Pier Chowder House and Tap Room at Arena Cove. Raffle winners must be present to win!

Coastal residents are invited to join in the fun of the 9th Annual Gualala Arts Auto Show with the “Cruise our Coastal Businesses” passport campaign.

Carry your passport with you and make purchases at the businesses listed on the backside. You will receive a mark or stamp indicating you shopped there.

Passports should be turned in at the Art Show by noon on Saturday, July 15. Winners must be present.

The more squares marked, the better your chance to win the “Grand Giveaway” raffle of an Arena Lighthouse package that includes a two-night stay in newly remodeled House 4 on the property, a Full Moon Night Tour of the lighthouse and dinner for two at the Pier Chowder House and Tap Room restaurant at the Point Arena Cove.

Motivational Speaker Nathan Ogden, who will be riding through the Gualala area during his “Chair the Hope” cycling event and will make a stop at the 9th Annual Gualala Arts Auto Show and Pinewood Derby on Saturday, July 15. 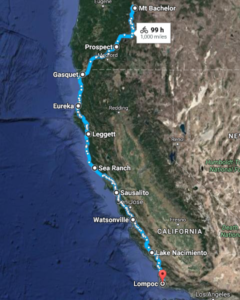 Ogden, a quadriplegic, will be riding a hand cycle in a relay-style ride with his wife and four children to raise awareness and money for wheelchairs to be delivered to developing countries. Ogden has broken his neck two separate times, leaving him paralyzed, but his disability has not altered his adventurous drive. Nathan, his wife Heather, and their children ages 10-18 will be cycling 1,200 miles from Mt. Bachelor, OR (where Nathan broke his neck the first time) to Los Angeles, CA. The Ogden’s know first-hand how a wheelchair can change a life.

Ogden will be at the Pinewood “Summernationals” derby for a while and then will speak briefly in the afternoon as his schedule permits.  “Some of my family will probably be going on ahead and then I will catch up. We are riding relay style, so we take turns,” he said. 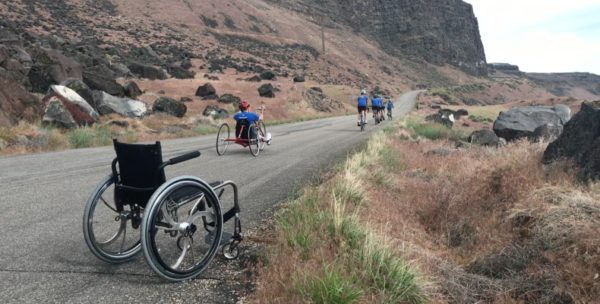 The goal of “Chair the Hope” is to inspire people to get outside and keep moving despite disabilities, fears, or excuses while raising $100,000 to donate to the Wheelchair Foundation. During the past 17 years, the Wheelchair Foundation has gifted over 1 Million wheelchairs to people in need worldwide. Ogden said he and his family are passionate about getting kids, mothers, and fathers, off the ground and into wheelchairs to allow them the independence to live with hope.

Using his years of challenging experiences Ogden has found superior coaching and awareness for moving from paralysis to progress in all areas of life and is passionate about sharing this message. He is the author of the book “Unfrozen”, his story with a message to help others live life fully. “Our true potential is discovered by melting away our limitations and living UNFROZEN.” The book can be purchased at Amazon by clicking here.

“The Gualala Arts Auto Show tends to bring out a pretty passionate bunch and we are excited that Nathan can bring his message here and share it,” said David “Sus” Susalla, Executive Director of Gualala Arts.

Gualala Arts values and appreciates our many generous local sponsors who make the Annual Gualala Arts Auto Show and Pinewood Derby possible. Please offer your patronage to these valued businesses.

Pastries and chai provided by Cafe Selkie: Lovingly prepared by pastry provocateur Lua Hentschel, each treat is uniquely crafted to warm the heart, balance the body, and sweeten the soul. Lua has no interest in long lists with hard to pronounce ingredients. She insists on baking with true foods that are organic and locally sourced. Let every bite be blessed with milk from grass-fed cows, organic stone ground artisan flour, and butter delicately clarified to golden perfection. We hope you enjoy! 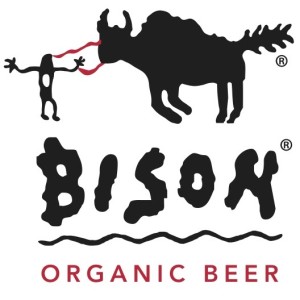 BISON® ORGANIC BEER: More than a beer, a movement.

Founded in 1989, Bison is an artesian company dedicated to brewing balanced, drinkable and 100% organic beers with an interesting twist. Bison strives to lead by example, educating that one need not sacrifice the pleasures of everyday living to be green. Bison is committed to reducing its impact on the planet through ecologically responsible choices in sourcing our packaging, production methods, and 100% non-GMO ingredients.