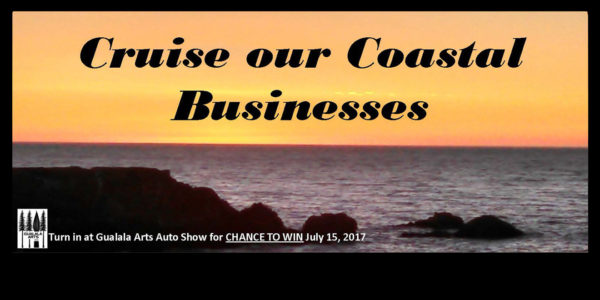 Coastal residents are invited to join in the fun of the 9th Annual Gualala Arts Auto Show with the “Cruise our Coastal Businesses” passport campaign found in this week’s edition of the ICO.

The business Passport includes a full list of 60 local businesses supporting and investing in the Auto show and Summer Nationals Pinewood Derby event happening Saturday, July 15 on the Gualala Arts Center grounds. Passports are also available in person at Gualala Arts Center and can be downloaded at GualalaArts.org and at local participating businesses.

Individuals should carry their passport with them and make purchases at the businesses listed on the backside to receive a mark or stamp indicating they shopped there. Passports should be turned in by noon at the Auto Show with whatever squares have been marked for chances to win the “Grand Giveaway” raffle prize. The more squares marked on the passport, the better chance to win.

The “Grand Giveaway” raffle prize is an Arena Lighthouse package of a two-night stay in the newly remodeled House No. 4 on the property, a Full-Moon Night Tour of the lighthouse and dinner for two at the Pier Chowder House and Tap Room restaurant at the Point Arena Cove.

This year’s auto show celebrates the 50th Anniversary of Sid Waterman Racing Components. Joining Sid for the auto show and celebration will be his longtime driver Ronnie Hampshire, recently inducted into the Drag Racing Hall of Fame, his brother, Jeep, who built the engines, and Kent Fuller, who constructed the chassis and is also in the Hall of Fame.