Click on image below for a video featuring Kitka 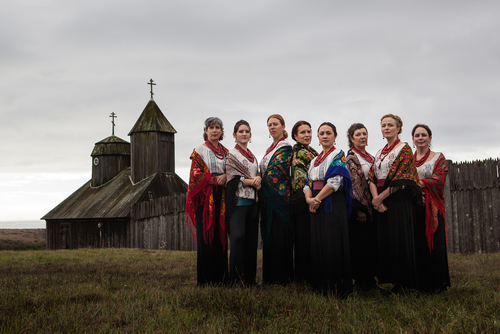 “For the past 35 years, this internationally recognized women’s vocal ensemble has developed a massive repertoire of Eastern European folk songs, presented as a joyous reminder that music-making is a sacred act and a communal celebration.” – Sam Prestianni, SF Weekly

The Oakland-based women’s vocal ensemble, Kitka, will make a stop at Gualala Arts Center during their Northern California six-concert “Wintersongs” tour in January.

Featuring unusual seasonal music from a wide variety of Eastern European ethnic and spiritual traditions, this is the ensemble’s third concert at Gualala Arts. 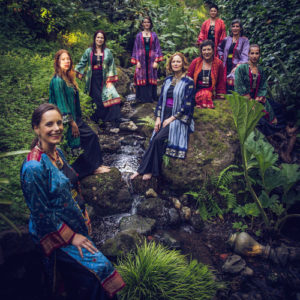 “In all the ethnic traditions represented, caroling and communal singing serve an essential social function. Winters in rural Eastern European villages have necessitated a culture of inter-dependency, and these songs accompany the gathering of people for both sacred and everyday purposes,” said Kitka’s Executive Artistic Director Shira Cion.

Now in their 37th year, Kitka is an American women’s vocal arts ensemble inspired by traditional songs and vocal techniques from Eastern Europe. The Oakland-based group travels regionally, nationally and internationally, driven by their dedication to developing new audiences and expanding the boundaries of folk songs rooted in Balkan, Slavic, and Caucasian women’s vocal traditions.

These sophisticated singers blend a contemporary sensibility with specialized vocal techniques that have been distilled over centuries. Using only the pure unaccompanied voice, Kitka creates a constantly shifting landscape of sound, pulsing with angular rhythms, where dramatic dynamics leap from delicate stillness to shattering resonance, and seamless unisons explode into lush, incomprehensible chords.

Kitka’s material ranges from ancient village duets to complex choral works, from early music to contemporary theater. The sound of their voices is exotic, both elegant and eerie. The melodies are hauntingly beautiful. The many languages in which they sing are largely unfamiliar to American ears: Albanian, Bosnian, Bulgarian, Serbo-Croatian, Georgian, Hungarian, Ladino, Latvian, Macedonian, Romanian, Russian, Ukrainian, Yiddish, with the occasional Latin, medieval Galician, or ancient Greek. It is exactly this unfamiliarity that is so riveting, as Kitka’s sensitive precision lifts their work out of the merely musical into a universe beyond words, an experience that is primal, elemental.