with Zydeco Flames plus Lloyd Meadows and The Soul Flames 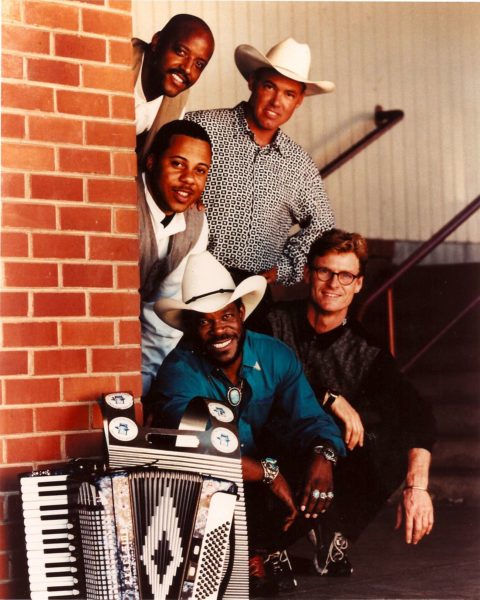 The Zydeco Flames consistently pack the house up and down the west coast and from California to New Orleans in venues ranging from contemporary clubs to major festivals and traditional dance halls. Their sizzling roots rhythms are timeless and the execution of them relentless, with a stunningly powerful groove. The Flames’ sixth CD release, “Fire It Up,” provides fans with hot Zydeco in the tradition of masters like Clifton Chenier, Buckwheat Zydeco and Queen Ida.

“The Zydeco Flames are truly one of the outstanding Zydeco bands in the U.S.,” said Fred Adler, Gualala Arts concert promoter for this event. “Their authentic sound inspires dancing and also provides a special thrill for just listening. Lloyd Meadows’ lead Zydeco voice and personality is irresistible, and when the band changes hats for this concert, performing as The Soul Flames, you will clearly hear Lloyd’s love and influence of Stevie Wonder, Wilson Pickett and others. There will be superb, authentic Creole Gumbo served, too!”

The Zydeco Flames Gumbo Fest performance will include hits from their earlier recordings such as 1995’s “Burnin’ Up the Tracks” through their more recent selections from “Fire it Up” in 2006 and “Bank of Fire,” recorded in 2003.

Zydeco music arose as a synthesis of traditional Creole music, some Cajun music influences, and African-American traditions, including R&B, blues, jazz, and gospel.

Frank Bohan , playing guitar, has musical roots deep in the styles of the Chicago blues. Flames’ fans are energized by his masterful solos and rhythm guitar work. Frank also served as bandleader for Freeway Frank and the Hotwires, and has played with Johnny Copeland, Alvin “Youngblood” Hart, Ricardo Scales, and Johnny Nitro. You can find Frank on Saturday mornings hamming it up with Marin favorites in the “Frank and Ted Show” at the Coffee Roasters in San Anselmo and jamming every other Wednesday at the infamous “Twangfest” at Peri’s in Fairfax with local luminaries Bonnie Hayes, Ted O’Connell, Jeb Harrison, Tal Morris, Eric Shram and Kevin Hayes (of the Robert Cray Band)

Bruce Gordon, on accordion, has traveled extensively in southwest Louisiana, playing with some of the best Cajun and Creole musicians. He has recorded for film, radio and television. He worked with Roy Rogers on a Grammy nominated album for “Ramblin’ Jack Eliott,” and has performed with the likes of Norton Buffalo, Jackie Payne, Luther Tucker, Elvin Bishop, Sista Monica, Kenny Neal and The California Honeydrops.

On bass, vocals and lyrics, producer and engineer Timm Walker is one reason why The Flames are known for having one of the tightest rhythm sections in the business. His performance credits include work with The Larry James Band, Roy Gaines, J.J. Malone, Sista Monica, Bobby Murray, and Andre Thierry. He is also a core member of The Elvin Bishop Band. Timm produced and engineered the Flames’ most recent CDs, “Bank the Fire” and “Fire it Up;” founded and recorded the New Orleans flavored funk at Beaufunk and engineered and produced their first CD “Change Gone Come Fa Betta.”

William Allums Jr. on drums is inspirational with his unique brand of Louisiana-spiced rhythms, continues to draw fans to their feet and on to the dance floor. This multi-faceted player has deep roots in gospel music, hip-hop and funk.