Celebrating the music and lyrics of Dave and Iola Brubeck

The Dan Brubeck Quartet will play music created when they first collaborated together specifically to record the 2 CD set “Celebrating the Music and Lyrics of Dave & Iola Brubeck,” which introduces Brubeck’s parents’ remarkable and surprisingly little-known songbook. 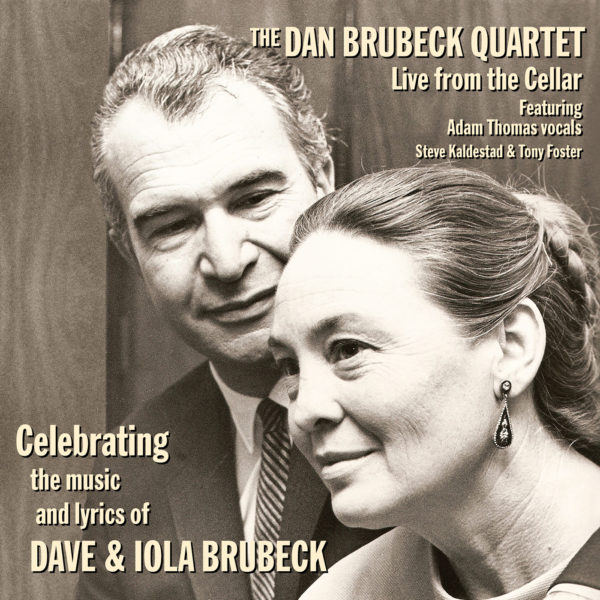 The youngest of the Brubeck’s six children, Dan wanted to explore some of the songs and textual settings his parents collaborated on over the years.

“Some of these songs could be classified as ‘standards,’ “Dan noted at the time of the CD’s release, “but most people have never heard them with Iola’s lyrics. Many of these songs have rarely been heard at all.”

The Dan Brubeck Quartet features the exceptional vocal talent of Adam Thomas (also on bass), with saxophonist Steve Kaldestad, and pianist Tony Foster. The opportunity to record the project with these musicians, some of the finest jazz players in the Vancouver, BC, area, arose unexpectedly when Brubeck made the serendipitous discovery that his bassist was the perfect vocalist for this material.

“He was completely in tune,” he says of hearing Thomas’s singing for the first time, “phrasing beautifully with a soulful sweetness, all while swinging his ass off on bass. When the quartet had a gig we just set up mics in the Cellar, which is tiny and intimate. I was just amazed when I listened back to what we got.”

They have been together since as the Dan Brubeck Quartet. “These are the guys who had good chemistry and we stuck together.” Brubeck is a longtime resident of British Columbia.

Born in Oakland on May 4, 1955, Dan Brubeck was a highly energetic child who found his calling at the trap set. Mentored by two consummate polyrhythmic masters, Joe Morello and Alan Dawson (at the Berklee College of Music), he was working professionally before he finished his teens.

Over the years he was featured on nearly a dozen albums with his father, and toured widely with the Dave Brubeck Quartet, including many appearances with the world’s leading orchestras. He’s been an integral part of the various Brubeck bands, including the Darius Brubeck Ensemble, Two Generations of Brubeck, and the New Brubeck Quartet.

Brubeck’s drumming style is mesmerizing and unparalleled, and his distinctive, and astonishingly textured drum solos have received standing ovations all over the world. His uncanny sense of timing and use of odd time signatures, combining melodic phrases with polyrhythms that often stretch far beyond the bar line, has earned the respect of many jazz critics worldwide. His mastery of complex rhythms has led to his reputation as one of the most talented and creative drummers in jazz.

Adam Thomas met Dan Brubeck in April 2010 and thus began the friendship that brought about the musical collaboration featuring the vocal music of Dan’s parents. Thomas is a startlingly soulful singer who puts a personal stamp on a wide variety of musical material, bringing an easygoing authority to interpreting songs made famous by masters such as Louis Armstrong.

Pianist Tony Foster hails from Vancouver, BC, and is one of the most highly regarded pianists in the country. His debut piano trio album, ‘In Between Moods’, released in 2009, charted in the top 50 jazz radio titles in North America. Foster has performed frequently in Italy and France, as well as more exotic locations like Bogota, Columbia. He has performed with notable jazz legends, Ernestine Anderson, Red Holloway, Terrell Stafford, Sheila Jordan, Dee Daniels, Jeff Hamilton, and Peter Washington.

Steve Kaldestad is one of the most in-demand saxophonists on the West Coast, performing as a sideman with Jesse Cahill’s Nightcrawlers, Jodi Proznick’s quartet, and many other noteable Vancouver jazz ensembles. He studied with Lee Konitz in New York, and subsequently moved to London, where he played with the Kate Williams Quartet, the BBC Big Band, and others. He has played or recorded with Denzal Sinclaire, Maynard Ferguson, Kurt Rosenwinkel, Peter Bernstein, Kenny Wheeler, the Karl Jannuska Group and Kevin Dean.

Tickets are $28 Advance, $5 more day of performance;
youth (17 & under) admitted free when accompanied by an adult.

Thanks to our generous sponsor, Coasting Home, Inc., for helping us roll out the REDwood Carpet in hospitality for our traveling artists.