$30 advance for each concert; $5 more day of performance. $50 advance for BOTH concerts, available at the Arts Center only. Young people ages 7 through 17 admitted free with adult. 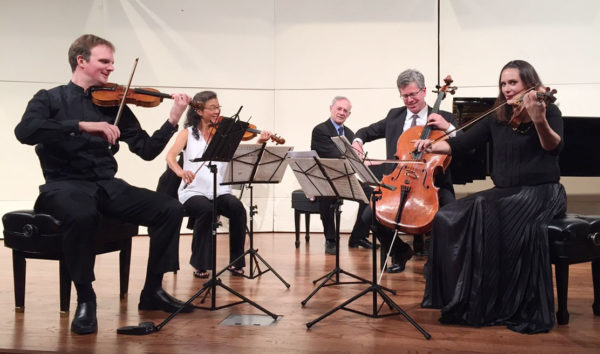 Pianist Bogas is a regular performer at many Chamber Music Series concerts, both as a featured artist and as an accompanist to other chamber musicians. He is being joined at this year’s weekend by his “friends” from the San Francisco Symphony, Axel Strauss and Amy Hiraga on violin, Nancy Ellis on viola and Peter Wyrick on cello. “Music lovers are invited to hear either one or both performances, for a fulfilling weekend of superb music performed by top artists,” says Steve Chell of the Chamber Music Committee. “This weekend continues the long tradition of top quality chamber music on the coast, in the intimate setting of the Gualala Arts Center Coleman Hall.”

Bogas debuted with the San Francisco Symphony at age 14 and at 19 became Yehudi Menuhin’s accompanist, playing over 100 concerts with him throughout North and South America. In 1962 he was a prize winner at the second Tchaikovsky Competition in Moscow. An active chamber musician, he is the founder and director of the MasterGuild Series of chamber music concerts at Holy Names.

Strauss became in 1998 the first German artist to win the Naumburg Violin Award, and in the seasons since he has been equally acclaimed for his virtuosity and his musical sensitivity by critics such as The Salt Lake Tribune, which praised his well-rounded artistry by saying “Strauss quickly established that he is a virtuoso to be reckoned with. But amid his technical acumen, there was a genuine musician. His interpretive prowess was delightful.”

Violist Ellis has been a member of the San Francisco Symphony since 1975 and also has performed for the past thirty years with the San Francisco Contemporary Music Players. Ms. Ellis is an experienced chamber music player and has been heard in this capacity in many venues, including Davies Symphony Hall.

Saturday’s program will feature String Quartet (the Bird), Op. 33, No. 3 by Haydn, Cello Sonata No. 3 in A Major by Beethoven, “Nigun” from “Baal Shem” for Violin & Piano by Bloch and Piano Quintet by Elgar. Sunday’s selections are Piano Quartet No. 1 in G Minor by Mozart, Violin Sonata No. 10 in G Major by Beethoven, “Night” for String Quartet by Bloch and Piano Quintet by Brahms.

$30 advance for each concert; $5 more day of performance.
$50 advance for BOTH concerts, available at the Arts Center only.
Young people ages 7 through 17 admitted free with adult.