In the tastiest event of the popular Whale & Jazz festival, local chefs & cooks will vie for the title of “Best Mendonoma Coast Chowder” in the 14th Annual Chowder Challenge.

This year, celebrity judge chef Jeremy Tummel will be replacing the past panel style of judging. Chef Tummel is Chef de Cuisine at the Stillwater at Pebble Beach Resort. He has an extensive education in the culinary industry and a wide-range of cuisine experience. Recently featured at the Four Seasons Tokyo as an ambassador of Central Coast food and wine pairings, he has a strong bond with the ocean, the land and the ingredients they provide.

Chef Tummel will be judging two categories, Traditional New England-style Clam Chowder and Open Class, whilst Challenge attendees vote for People’s Choice and Most Tasted awards. The open Class can included, but not limited to Manhattan-style Clam, Crab, Shrimp, Scallop, Lobster, Abalone, Salmon, or any other seafood combination. Vegetarian Chowders such as corn or mushroom chowder are also eligible. 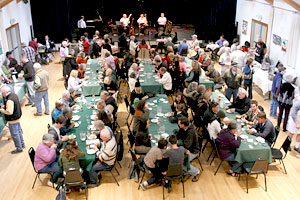 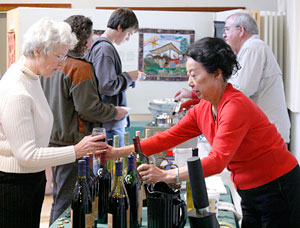 This family-friendly midday event includes a concert of traditional New Orleans jazz performed once again by the ever-popular “Barnebey’s Hot Four” of Sonoma County, returning to the Gualala Arts Center for the tenth straight year. The repertoire for the afternoon will include old favorites, the resurrection of some obscure musical gems from the golden age of jazz, and probably a few surprises for musicians and listeners alike, all in the tradition of the Big Easy. Those wanting to work off their chowder tasting with dancing will find themselves toe-tapping and boot-stomping as the infectious beats of New Orleans pushes them towards the dance floor!

Tickets are $20 in advance; $5 more day of the event, and include commemorative wine or beer glasses and 15 chowder-tasting tickets, complete with hot bread fresh out of the oven and beverages, including local fine wines and microbrews as well as soft beverages. Additional tasting tickets will be available onsite for $1 each. Free admission for music only.