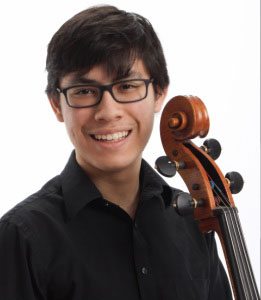 Zlatomir Fung, cellist, accompanied by pianist Miles Graber, will perform at the Gualala Arts Center, Sunday, February 14, 2016, at 4 p.m. Advance tickets are $25 for adults ($5 more day of performance) and free to those aged 7 to 17 with accompanying adult (no children under 7, please).

Zlatomir Fung is a student of Richard Aaron and Julie Albers; Fung’s other cello teachers have included Ann Grabe, Nancy Hair, and Emmanuel Feldman. Homeschooled in Westborough, Massachusetts, Fung has won gold medals at the 2015 Johansen Competition, the 2014 Stulberg String Competition and the 29th Irving Klein Competition, and has been the recipient of a long list of prestigious awards both domestically and internationally. He placed second in the cello division of the 20th International Brahms Competition in Portschach, Austria in 2013, and in 2012 was the silver medal winner of the cello division of the Seventh International Tchaikovsky Competition for Young Musicians in Montreux-Vevey, Switzerland. In domestic media appearances, Fung has appeared on American Public Media’s “Performance Today,” and is a four-time guest of NPR’s “From the Top.”

Despite his youth, Fung already has a rich and varied performance career, and has appeared in numerous venues in the United States and abroad. He comes to Gualala Arts Center having recently returned from a tour of Bulgaria in which he performed solo recitals around the country.

Fung comes to the Mendonoma coast having guested or headlined at such prestigious venues as Jordan Hall, the Tsai Performance Center, the Benedict Music Tent, Harris Hall and Carnegie Hall’s Weill Recital Hall. He is an avid chamber music player and he has performed with the Jupiter Symphony Chamber Players, the Walden Chamber Players and the Arneis Quartet, as well as with the Grammy-nominated chamber group, “A Far Cry.” A multi-faceted person as well as performer, Fung enjoys both philosophy and literature, and plays chess competitively.

Miles Graber received his musical training at the Juilliard School, where he studied with Anne Hull, Phyllis Kreuter, Hugh Aitken, and Louise Behrend. He has lived in the San Francisco Bay Area since 1971, where he has developed a wide reputation as an accompanist and collaborative pianist for instrumentalists and singers. He has performed with numerous solo artists, including Sarah Chang, Cho-Liang Lin, Camilla Wicks, Axel Strauss, Mimi Stillman, Judith LeClair, Martha Aarons and Lev Polyakin. Mr. Graber performs frequently with violinists Christina Mok and Mariya Borozina, flutists Gary Woodward, Amy Likar, and Ai Goldsmith, and clarinettist Tom Rose. He is a member of the chamber groups Trio Concertino, MusicAEterna, GGR Trio, and Sor Ensemble, as well as the new music group Sounds New.