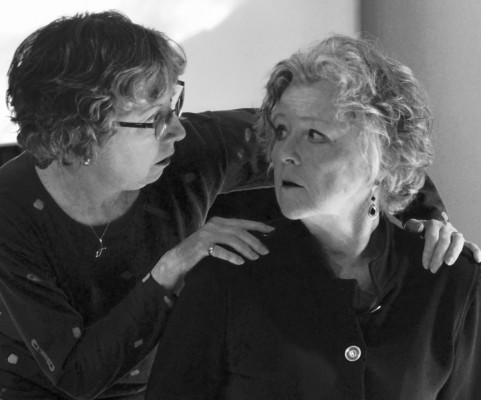 Readers’ Theater will present “Murder in Gualala,” a dinner-mystery play, at Gualala Arts Center on Saturday February 27, 2016 at 6:00 pm. Foyer doors and no-host bar open at 5:00. A four-course dinner will be served during the evening. Reservations are $50 advance per seat; $5 more day of the performance if any seats remain.

“Murder in Gualala” is the brainchild of local playwright Dennis Carter. Friends, family, and one very nosy reporter are gathering for the funeral service of Alma, a long-time Gualala resident. The play opens in rural Sonoma County at the cabin of Angela (played by Diane Boeke), an old friend of Alma’s.

One of Alma’s granddaughters, Carol (played by Lynne Atkins) and her husband, Mike (played by Phil Atkins), were driving up from San Francisco via a back road to attend the funeral when car trouble develops. They are marooned at Angela’s cabin, where the first hint of unease develops.

As the play unfolds, we meet Alma’s other granddaughter, Barbara (played by Jan Carter). She and her cousin Carol give new meaning to the concept “mutual dislike.”

Enter Steve Oakwood, played by David Skibbins. Steve is a new resident of the Sea Ranch. He’s a reporter, in fact a crime reporter, just retired from an L.A. newspaper. He learns there just might be more to Alma’s death than meets the eye. Jealousy. Old family secrets. Hidden treasure. Who killed whom, and why? Is anyone at risk, and why?

And the answers are? Like many good dinner-mystery theaters, the audience participates. The play is in four scenes. The dinner is in four courses. In between scenes, the dinner courses are served. While enjoying the courses, each table of diners tries to solve the mystery and win the prize!

Food for thought, but also food for the detective of delicious dishes. The heavenly four-course dinner starts with un piatta di antipasti. The second “act” is a crunchy Caesar Salad swaggering with the drizzle of a great dressing. The main course showcases beef short ribs slowly simmered in beer, accompanied by a rich polenta and fragrantly roasted winter vegetables. As the audience deduces the final key to the play, their reward is triple chocolate mousse cake with whipped cream and raspberries. A no-host bar supplies wine, beer, and other beverages.