The January 2016 exhibit at The Dolphin Gallery introduces two artists who are relatively new to the local art scene. This is the first Dolphin exhibit for both Paula Rie Bonham and Elizabeth Beronich Sheets. 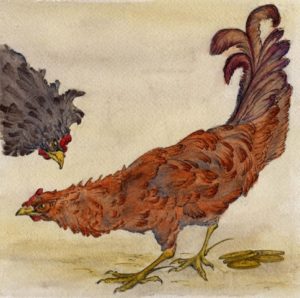 The fertile mind of Elizabeth Beronich Sheets not only creates distinctive pieces in a variety of media, but her work also creates a distinctive milieu leading the observer to conjure up exotic worlds. Her initial appearance at the Dolphin provides an experience unlike any that patrons have previously seen.

Perhaps her inspiration derives from the twenty-five years she spent as a self-described “theater gypsy” when she worked as a costume designer and technician for professional theater companies. During the last half of that career she began assembling handmade books using traditional techniques, thus combining her interest in writing, illustrating, and composition. 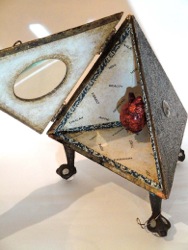 Originally, she made an edition of a children’s alphabet book and later made two other illustrated children’s books. Then, she expanded and refined her techniques until she now produces one-of-a kind creations she calls “sculptural books.” Among other mixed media materials she may include handmade paper, watercolor, gouache, acrylic, linen thread, leather, even found objects.

Sheets describes her creative process in the following way. “When I begin a piece, I consider the mood I want to convey and I select a focal point to invoke that mood.   As I work through the process I build the peripheral elements in support of the message. The images and materials used create a cohesive world within which the viewer travels stimulating emotions, memories, desires and unexpected dreams.”

Since moving to Point Arena two years ago Sheets has been part of the local art scene at Gualala Arts and most recently in the 2015 Studio Discovery Tour. Her Facebook page as well has a collection of images and other entries can be found on-line by Googling “ElizabethBeronichSheets.”

Paula Rie Bonham, through her wide range of expressionist paintings, elicits positive and inquisitive responses from her viewers. For Paula, making art is a fun, challenging, intellectual, and spiritual experience that is crucial to her happiness. The fact that her work has contributed to bringing joy to others is immensely rewarding to her.

Paula’s “Aspen and Apples” series which she exhibits in this show, is a particularly good representation of how she can creatively depart from a more realistic interpretation to convey a more personal vision in terms the viewer can appreciate. She derives inspiration from nature as evidenced in this series of abstracted still life paintings.

Enjoying a wide range of subject matter allows Paula to work dynamically. Her distinctive portraits seek to reveal the inner character and psychology of her subjects and she is especially adroit in her images of large-scale horse paintings. She captures their fluid motions through powerful lines and dramatic suggestions of movement. More examples of her distinct style can be found at her website: www.PaulaRieBonham.com.

For most of her life Bonham has been visiting or living part-time on the Mendonoma coast and plans to retire in Gualala someday. Most recently, she participated in last year’s Portrait Project hosted by the North Coast Artist Guild at the Gualala Arts Center. She also attends the Gualala Arts Life Drawing sessions. 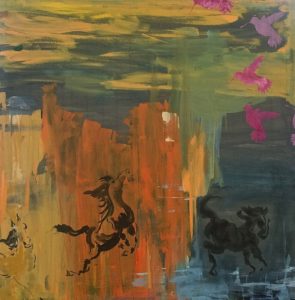 When Bonham is not living on the coast she can be found in Reno, Nevada where she is a resident artist at The Reno Generator, a collective of both fine and performing arts members who pool resources to pursue their creative interests. She has been instrumental in developing an outreach program for the Reno area. One can learn more about the program at www.therenogenerator.com.

Paula Rie Bonham feels blessed to have lived, worked, and painted in many parts of the world. Originally from the San Francisco area where she earned her degree in Fine Arts at the California College of Arts, she has studied at the École d’Art in Paris, the Massachusetts College of Art in Boston, and the University of the Pacific in Stockton. Paula actively exhibits her work and this is her first two-person show at the Dolphin.