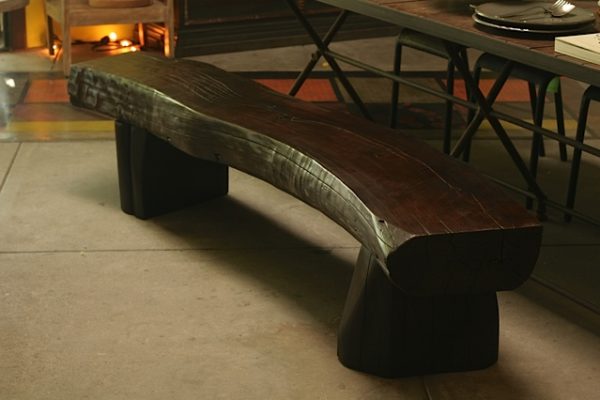 Brad Wilson is both artist and designer. His tables over the past 20 years have been both evocative and contemporary.

Brad’s first inspiration to be creative happened at a young age. He always enjoyed making beautiful creations early on. Early printmaking courses in Junior High creating woodblock prints and taking ceramics courses would eventually evolve into drawing the figure and combining the two at Santa Barbara City College in 1975. Brad attended Sonoma State University in 1978 where he received his BFA in printmaking. Lithography became a medium of choice at that time creating stone lithographs and monotypes from live models. 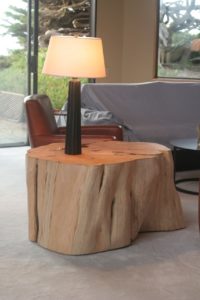 At the same time clay Raku sculptures of both abstract extrusions and figurative works were brewing. Brad’s first encounter with the Raku process occurred at Sonoma State where he created a series of swim suit figures displayed in the Sonoma State University Gallery. This also led to his representation at Art Space Gallery in Santa Monica where he incorporated clay extrusion along with living plat forms such as sphagnum moss and lichen.

Brad then attended Otis/Parsons School of design in 1981 receiving his MFA. During that time he created sculpture, drawings, and multi media environment’s collaboration much of the time with his wife Pamela Holmes. Their first collaborations began in 1979 by creating drawings, sculptures, and lithographs. This would eventually lead to their collaboration in creating one of a kind tables that were sold in several exclusive store’s in the San Francisco Bay Area and Austin, Texas. Their tables continue to be sold internationally to individuals, architects, interior designers, and exclusive stores like The Gardener in Berkeley and Healdsburg, Artifact Design in Sonoma, Maker and Moss in San Francisco, and Summer House Gallery in Mill Valley. 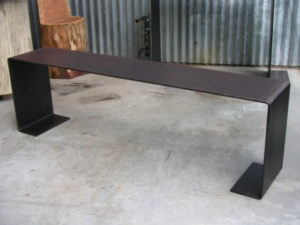 All the while Brad and Pamela created their own furniture within the business. Brad Wilson is a diverse artist, he uses materials of contrasting textures to create seductive tables in reclaimed and recycled wood, salvaged Monterey Cypress, zinc, copper, and steel. His palette is constantly expanding. His affinity with the fine art sculpture of artist’s like Brancusi, David Nash, Andy Goldsworthy, Joseph Beuys, Carl Andre, Richard Long, and Lucio Fontana and the way they juxtaposed contrasting materials to produce evocative works of art would be source of inspiration along with furniture makers and designers like

George Nakashima and Isamu Noguchi. There is a great satisfaction for Brad in having these objects in people’s daily lives. The table is a witness to conversations, celebrations, and the drama that occurs in one’s daily life.

Brad Wilson has sold his tables to Architect’s, Designer’s, stores like The Gardener in Berkeley and Healdsburg with his tables shipped internationally since 1995. 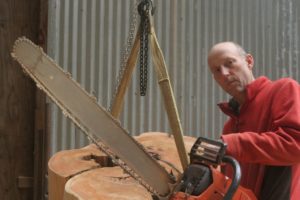 Brad Wilson’s upcoming show will feature his latest sculptural tables and benches which he creates using chainsaws and other tools of the trade in order to achieve his goal of creating a beautiful, seductive, sculptural, and utilitarian objects. Brad’s materials palette will range from and combine wood, zinc, copper, and steel and have an affinity with sculpture.

Also featured will be early works from 1979 – 1990 of both Figurative Raku sculpture and pit fired clay extrusions which will adorn this tables. More information on Brad’s Tantalizing Tables is available here.