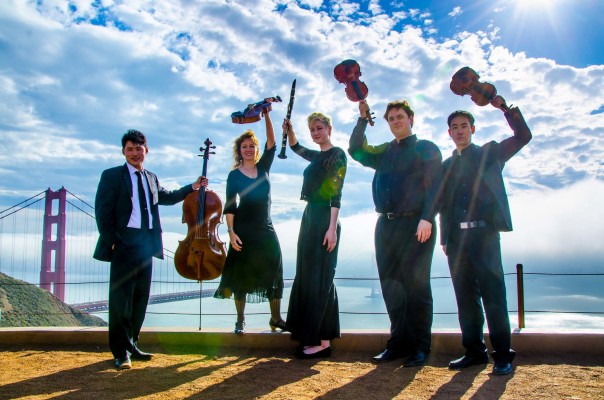 The Farallon Quintet, founded in the summer of 2012, is a dynamic Bay Area ensemble and the only professional chamber music group focused exclusively on the clarinet quintet—string quartet plus clarinet—repertoire. In addition to playing the classics, the group seeks to perform rarely heard works as well as new music by living composers. With at least 160 existing clarinet quintets to choose from, the group offers diverse and engaging programs to the general public. In addition to formal concerts, the musicians look for opportunities to present informal educational programs at such venues as schools, hospitals, museums, and retirement communities. In the 2013-14 season, The Farallon Quintet performed 16 concerts on recital series and at universities including U.C. Berkeley, U.C. Davis, and Humboldt State and premiered new works by Durwynne Hsieh and Jay Sydeman. The 2014-15 season will consist of over 20 performances throughout Northern California, sextet collaborations with pianist Jon Nakamatsu, and several new music commissions for composers including Shafer Mahoney, Peter Josheff, and Chad Cannon.

The quintet is made up of leading Bay Area musicians — Alexander Bedenko, clarinet, Mariya Borozina and Matthew Oshida, violin, Caroline Lee, viola and Jonah Kim, cello  — who are principal players in such orchestras as the San Francisco Ballet, Santa Rosa Symphony, Marin Symphony, Berkeley Symphony, Fremont Symphony, Modesto Symphony, and the Sacramento Philharmonic. As an ensemble, the players recently received a grant from San Francisco Friends of Chamber Music to record and release their debut album in early 2015.

The group takes its name from the Farallon Islands, located right off the coast of San Francisco. In addition to being a landmark location close to where the players live and work, its meaning—“pillar” or “steep rock” in Spanish—indicates the group’s vision to become an important “pillar” or “rock” in classical music by building awareness around the lesser known yet musically significant clarinet quintet repertoire. The Farallon Islands also represent the group’s inspiration which is founded in the simplicity and beauty of nature. In fact, the group is known to intersperse rehearsals with hikes in the mountains and road trips—all with the intent to discover the natural beauties of Northern California.

The planned program for this concert is available here.  Please note that the planned lineup of musicians listed below is subject to change. 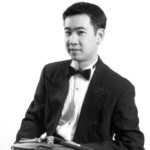 San Jose native Matthew Oshida has performed with orchestras throughout the country including the San Jose Symphony, Utah Symphony, Huntsville Symphony, Sarasota Opera, and Tulsa Symphony, Opera, and Ballet. He has appeared in principal positions with the orchestras in Berkeley, Fremont, Sacramento, San Jose, and Modesto, recorded with the Mormon Tabernacle Choir, and accompanied such popular artists as Sarah Brightman, Michael Bolton, Trans-Siberian Orchestra, Mannheim Steamroller, and Harry Connick, Jr. As a chamber musician, he studied with members of the Cleveland and Juilliard Quartets, performed with members of the Emerson Quartet, and participated in live broadcasts for BBC Radio 3. Outside of the concert hall, he has demonstrated the link between music and leadership through performing at training seminars for executives at such companies as eBay, Chevron, Intel, WPP, and Protiviti. His principal teachers include Franco Gulli and Igor Gruppman on violin and Katherine Murdock on viola. His music festival participation includes the Aldeburgh Festival, Britten Festival, AIMS Festival, Mendocino Music Festival, Monterey Jazz Festival, Cabrillo Festival of Contemporary Music, Midsummer Mozart, and Music in the Mountains. He received a B.M. from Indiana University and M.M. from SUNY Stony Brook. 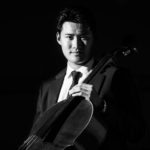 Jonah Kim made his solo debut with Wolfgang Sawallisch and the Philadelphia Orchestra in 2003. The same year, he also appeared with the National Symphony Orchestra in DC where the Washington Post called him simply, “the next Yo-Yo Ma.” He graduated from the prestigious Curtis Institute in the spring of 2006 while only 17 years old, and has soloed with the Philadelphia Orchestra, National Symphony Orchestra, New Philharmonia, Symphony of the Americas, Orquestra Sinfônica Nacional and many others. Mr. Kim’s recitals at venues like the Kimmel Center, Kravis Center, Kennedy Center, the Phillips Collections and the Arsht Center have been streamed live and re-aired on podcasts, radio and TV programs for WETA, WHYY, WITF, MPBN, WXEL, NPR, NBC, CBS and PBS. In addition, he has played in live concert with pop figures such as the Beach Boys, Andrea Bocelli, Vic Damone, Regis Philban, Kenny Rogers, and the Trans-Siberian Orchestra. Currently, he is Associate Principal Cello of the San Francisco Ballet Orchestra, of which he is also the youngest member.