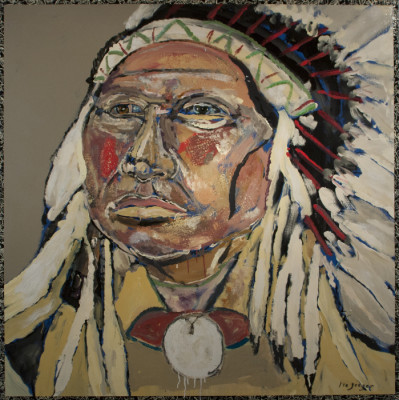 I am tired of talk that comes to nothing. It makes my heart sick when I remember all the good words and all the broken promises. There has been too much talking by men who had no right to talk. It does not require many words to speak the truth.”

The melancholy history of the American Indian over the last three centuries is all too well known. Through the introduction of foreign diseases, systematic genocide and relentless geographical marginalization, European colonies and later the manifest destiny of Americans reduced the once mighty family of Indian nations to near extinction. Their exploitation has been the subject of volumes of authoritative histories and is not in dispute. It is a sad chapter in the history of our country. That this body of moving images of Native Americans was created over the past 40 years by this artist is both surprising yet understandable.

Ira Yeager was perfectly situated to take advantage of a defining moment in the history of Bay Area art when he started his art training at the California College of Arts and Crafts in 1957 followed by time at the San Francisco School of Fine Arts in 1959. Figuration, inspired by the energy of abstract Expressionism, was being transformed by Richard Diebenkorn, Elmer Bischoff and Nathan Oliveira into a dynamic new way of responding to the world around us. Through their teaching and by their example, Yeager came into his own as an artist. By the time he left for further study in Italy in 1960, Yeager’s course was set as one who took advantage of exuberant color, bold composition and painterly application to form his distinctive artistic voice.

A world traveler who has spent extended periods of time in Italy, Greece and New York, Yeager is famous for his ability to transform his love of the eighteenth century into a twentieth century equivalent of Mozart’s music containing humor, sweetness, formality and grandeur.

There is, however, another side of Ira Yeager. He has never forgotten that he is a Westerner. Born in Bellingham, Washington, he is related to a distinguished family of early settlers of the state. Their claim to fame was as outfitters to generations of explorers and sportsmen in an era when the divide between civilization and wilderness was more clearly defined.

In the mid-1960s, Yeager’s natural wanderlust led him to Santa Fe, New Mexico, and while there commenced an artistic dialogue that has continued unabated to the present day; his masterful series of Indian portraits. Large (rarely less than four by four feet), frontal, and often disturbingly direct, Yeager usually concentrates solely on the faces of his subjects adorned with their ceremonial trappings. The appearance of feathers, beadwork and fabric allows Yeager to display his bold yet balanced application of color. With often vibrant, solid color or patterned backgrounds, they command attention.

Despite their technical brilliance, it is not so much what you see in them but how you feel about them that transforms these painted renderings into deeply moving portraits. They display stateliness, wisdom and a sense of history measured by loss in their stoic and furrowed faces staring out at us. Yeager’s paintings are in the tradition of late 19th and early 20th Century photographers such as F. Jay Haynes, Frank A. Rinehart and Edward S. Curtis who admirably portrayed the Native Americans they photographed with a quiet dignity that continues to be compelling even today.

In his Indian paintings, Ira Yeager allows his humanity as an artist to shine through without sentimentality but with a profoundly moving display of character and gravitas. These paintings, of course, cannot undo or make up for the wrongs inflicted on Chief Joseph and countless other Native Americans, but they serve to remind us of an often-underemphasized aspect of who we are and where we come from as Americans that should never be forgotten.