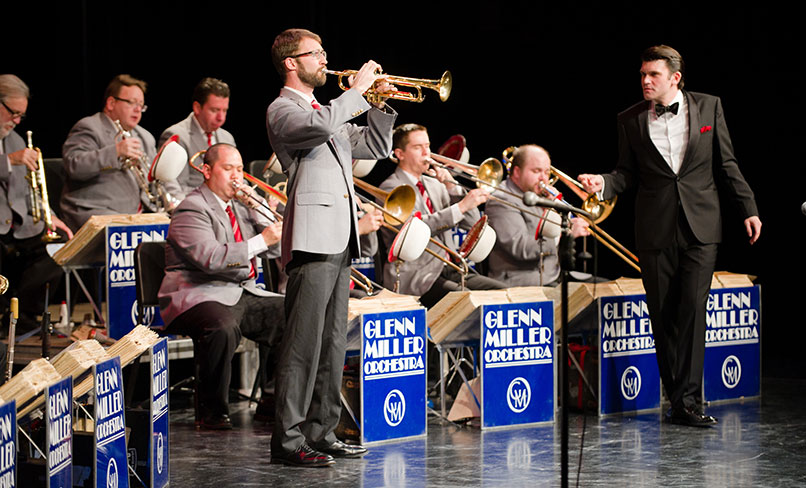 Thanks to a serendipitous scheduling arrangement and the efforts of Fred Adler of KTDE 100.5 FM, Gualala Arts has the good fortune to offer what promises to be a once in a lifetime trip down memory lane.

On Thursday, August 27 the World Famous Glenn Miller Orchestra under the direction of Nick Hilscher will perform in Coleman Auditorium. This concert is presented in association with and is partially underwritten by North Coast Brewing Company, whose fine craft brews will be available at the No Host bar the evening of the concert.

An eighteen-piece orchestra backed by the Moonlight Serenaders recreates the magic for which Miller was so famous. The repertoire includes Miller classics such as “Tuxedo Junction,” “Pennsylvania 6-5000, “and “Moonlight Serenade.” It also plays lesser known Miller arrangements and other songs in the Miller style.

Those who get “In the Mood” (another Miller classic) will be able to cut loose on the open dance floor set up next to the stage while those at the cabaret style tables listen. The Cupcake Sisters will offer their edible treats all evening and there will be a no-host bar.

Although Miller died tragically over the English Channel in 1944, his fame lived on in the 1954 classic movie “The Glenn Miller Story” starring James Stewart and June Allyson. Each performance includes a special tribute to Miller’s wartime service in the Army Air Corp and to honor all veterans with an unforgettable rendition of “The American Patrol,” a nineteenth century march whose iconic swing version Miller first recorded in 1942.

In 1956 the Miller Estate reformed the orchestra under the direction of drummer Ray McKinley complete with red blazers, vocalists, and the unique reed section sound that set Miller apart in an era of legendary big bands. It has been on the road ever since and plays over 300 venues a year across the United States and around the world.