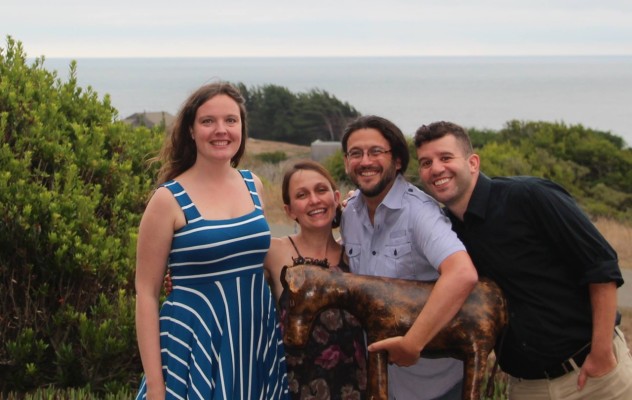 Artists at Albatross Reach (AaAR) is delighted to present its first annual culminating concert at the Gualala Arts Center.

AaAR is dedicated to bringing artists together to create, explore, and perform a variety of works, this program will reflect the diversity of the 2014-2015 guest artists. In addition to co-directors Jennifer Beattie (mezzo-soprano), and Adam Marks (piano), all guest artists from the past year will return to the Mendanoma community for this special event. Included on this program are Jennifer Woodrum (clarinet), Craig Marks (composer and guitar), Lisa Kaplan (composer and piano), and Kerrith Livengood (composer and flute).

Hailed by Opera News for her “exuberant voice and personality,” mezzo-soprano Jennifer Beattie is a versatile and dynamic performer in styles ranging from opera to chamber music to cabaret. On the concert and opera stages Ms. Beattie has appeared as soloist with the Philadelphia Orchestra, The National Opera Orchestra at the Kennedy Center, the Opera Company of Philadelphia, The Columbus Symphony Orchestra, and the National Chorale in Carnegie Hall. Ms. Beattie has been heard performing art song and chamber music at such venues as the the Stotsenberg Recital Series (with pianist / composer John Musto at the piano), Lincoln Center Library for the Performing Arts, The National Arts Club, The Juilliard School, Riverside Church, The Manhattan School of Music, the Lake George Music Festival, The Texas Music Festival, the Philadelphia Chamber Music Society, and the Mozarteum in Salzburg. In the fall of 2013, she will make her debut with the Brooklyn Art Song Society.

An avid interpreter of new music, Ms. Beattie has premiered many pieces written for her voice by such preeminent composers as Tom Cipullo (Insomnia),Laura Schwendinger (Sudden Light), Kathryn Alexander (Jazz Songs, Money Keeps Talking, Jabberwocky) and Tom Whitman (At War’s End). 2013 marks her third season as vocalist-in-residence at New Music on the Point festival. Her collaborative history includes The Network for New Music, Chicago’s 5th House Ensemble, the JACK Quartet, and I.C.E. Ms. Beattie holds a Master of Music degree from the Manhattan School of Music. 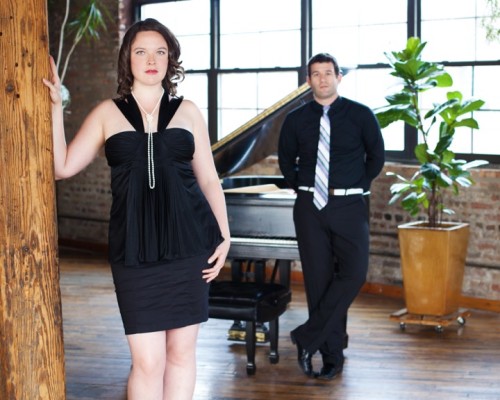 Praised as an “excellent pianist” with “titanic force” (New York Times), Adam Marks is an active soloist, chamber musician, and educator. He has appeared as soloist with the Mission Chamber Orchestra, Manchester Symphony Orchestra, the National Repertory Orchestra, and at notable venues including Salle Cortot, Carnegie Hall, Miller Theatre, Logan Center for the Arts, Millennium Park, Ravinia, and the New World Symphony Stage. He was a laureate of the 2008 Orleans Competition for contemporary music in Orleans, France. Performances in the 2013-2014 season also include debut recitals in Brazil, Singapore, and Croatia.

In addition to serving as Pianist and Director of Artistic Programming for Chicago’s Fifth House Ensemble from 2007-2012, Mr. Marks has a long list of collaborators including eighth blackbird, violinist Matt Albert and mezzo-soprano Jennifer Beattie. His work has been featured in films by Jenny Perlin and on stage with performance artist Connie Beckley. Also in demand as an educator, he specializes in teaching public speaking and creative presentation for musicians along with traditional instrumental instruction. Adam serves as the Artistic Director of Chamber Music Programs at the Third Street Music School Settlement in New York, and has held faculty positions at Carthage College, NYU, the fresh inc festival and New Music On The Point. He has also given guest lectures and masterclasses at Yale, Juilliard, Manhattan School of Music, Northwestern, Mannes, SMU, CU Boulder, The Colburn School, and many other prestigious institutions. He holds an undergraduate degree from Brandeis University, a Masters from Manhattan School of Music, and a Ph.D. in Piano Performance from New York University with research in works for vocalizing pianist. His teachers include Sara Davis Buechner, Anthony de Mare, Donn-Alexandre Feder, Evan Hirsch, and Lois Banke. Adam proudly plays Yamaha pianos and Schoenhut toy pianos.

Born in Motown, Lisa Kaplan is a pianist specializing in the performance of new work by living composers. Kaplan is also the founding pianist of the three-time Grammy Award-winning sextet eighth blackbird. She has won numerous awards, performed all over the country and has premiered new pieces by hundreds of composers, including Andy Akiho, Derek Bermel, Jennifer Higdon, Amy Beth Kirsten, David Lang, Nico Muhly, George Perle and Steve Reich. Kaplan has had the great pleasure to collaborate and make music with an eclectic array of incredibly talented people – Mario Batali, Jeremy Denk, Bryce Dessner, Glenn Kotche, Gustavo Santaolalla, Steve Schick, Robert Spano, Dawn Upshaw and Michael Ward-Bergeman to name a few. Recently she has greatly enjoyed and appreciated the opportunity to do some composing and arranging for eighth blackbird. Kaplan is a true foodie, gourmet cook, avid reader, crossword and Scrabble addict, enjoys baking ridiculously complicated pastry and loves outdoor adventures. She has summited Mt. Kilimanjaro, braved the Australian outback, stared an enormous elephant in the face in Tanzania’s Ngorogoro Crater and survived close encounters with grizzly bears in the Brooks Range of Alaska.

I compose chamber music, vocal music, orchestral works, and electroacoustic music. I am also a flutist, drummer, vocalist and improviser, performing with many different new music and experimental music groups, such as Alia Musica Pittsburgh and with members of eighth blackbird at the Music09 and Music11 Festivals.

Between September 2010 and September 2011, I created a new piece of music every day, posting each piece online as an ongoing project called Clang Jingle Clang. Coming up with and executing new ideas in just a few hours each day helped me develop a better knowledge of myself as a composer – I became more interested in pattern variations and combinations of noisy and pitched sounds. You can learn more about Clang Jingle Clang on the Projects page.

My music uses timbrally complex and harmonically rich sounds to generate unexpected musical forms, often featuring patterns subverted by secondary musical events. Frequently, I write music which challenges normal relationships between individuals and groups, especially conductors and ensembles, as a means of exploring different possibilities for decision-making and rebellion among performers. Often this takes the form of text-based, graphic, and open form works, inspired by my participation in the experimental and improvisatory music community in Pittsburgh.

Currently I am setting four poems by contemporary poet Jennifer L. Knox for mezzo-soprano, flute, and piano. Each song has its own harmonic language, ranging from diatonic to harshly dissonant, and each features noisy nontraditional sounds that contradict or comment upon the poem’s apparent meaning. 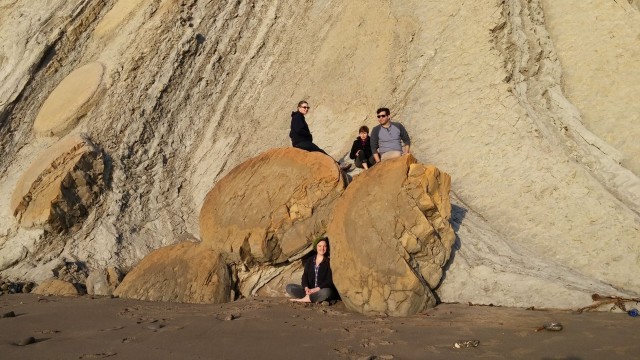 On any given day, Craig can be found hard at work in the studio coaxing rhythm and melody from an extensive array of “instruments” – many bought or found, but some built specifically for projects by Marks himself. Buzz saws, antenna arrays, and a horrifically broken dishwasher have all found a place in his scores.

For the last 13 seasons of A&E’s Emmy and PRISM award winning hit series “Intervention,” Marks has created consistently compelling music rooted in an ever evolving main theme, which was nominated for a Hollywood Music in Media Award in 2012 for Best Original Theme Music – TV Show.

Marks quickly earned his stripes while still a student at UCLA. Having scored his first films and worked with a leading commercial music production company, Craig was soon invited to apprentice with Hans Zimmer – officially launching his journey as a Hollywood composer. Marks went on to work alongside many other established composers, contributing his talents to a wide-ranging list of films.

Fluent and active in a wide variety of genres, Marks has written for feature films, network and cable television, animated series, commercials, and classical ensembles.

Jennifer Woodrum has been praised as a chamber musician and soloist for “achieving a magical resonance and warmth through her powerful tone.” A founding member of Chicago’s Fifth House Ensemble, Jennifer’s commitment to engaging audiences through the performance of chamber music both old and new sends her to world renowned venues all over the country. Jennifer performs solo recitals regularly as a sponsored artist of several Chicago music clubs including the Chicago Musicians’ Club of Women, the Union League Civic and Arts Foundation, and the American Opera Society. She is on faculty at Carthage College in Kenosha WI and is on the teaching artist roster for the Ravinia Festival. Jennifer holds a Bachelors and Masters degree in Music Performance from Northwestern University where she studied with Russ Dagon. Jennifer has been a member of the Civic Orchestra of Chicago and the Rockford Symphony. She has performed with the Elgin Symphony, the Ravinia Festival Orchestra, the Grant Park Symphony and the Chicago Sinfonietta. A devoted mother to two beautiful children and two highly energetic dogs, Jennifer sees life as a constant challenge to achieve balance. A self-proclaimed health nut, in terms of bacon and butter being health foods, Jennifer loves spending time in her kitchen.

For more on our outstanding artists, please visit artistsatalbatrossreach.com. We hope to see you on May 25th to celebrate a wonderful year of music making.

Tickets are $20 advance; $5 more day of event.
Children and young people ages 17 & under are admitted free with adult.